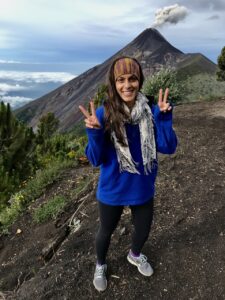 “When I was a resident we didn’t have a resident and fellows section!” I heard the words come out of my mouth and immediately cringed because I sounded like an old dingbat. But it’s true, and I’m not even that old! (Or am I?) The CAIR Resident, Fellow, and Student Section (RFS) is in its third year and continues to grow in numbers. Dr. Alanna Supersad is the new Chair of the RFS, we wanted to get to know Alanna a bit better and figured our reader(s) may as well.

Dr. Supersad is currently a PGY-4 resident in diagnostic radiology at the University of Alberta.  She was born and raised in Edmonton, and after medical school at the University of Calgary is back in her hometown to complete residency. Alanna’s road to medicine started when she took a job as a technologist assistant in a CT department when she was 18, continuing to work there throughout undergrad.  Through this work she realized she enjoyed the hospital setting and loved patient care. After a science based undergraduate degree, a year spent teaching in Spain and half a nursing degree she decided medicine was a better fit for her and dropped out of nursing school to pursue her medical degree. I assumed her background in medical imaging may have inspired her to choose radiology, but it did not!  In fact when she started medicine she thought she did not want to be a radiologist.  Famous last words!  As she moved through her clinical rotations she slowly ruled out other specialties and came to her senses/to the realization that the medical imaging department is the backbone of the hospital and all the interesting cases at some point made their way through the department. As a radiology resident Alanna has so far enjoyed all of her rotations, but by day 2 of her IR rotation she was hooked and knew it was for her.  She liked the hands-on nature of the work but really enjoyed the team based approach, working alongside technologists and nurses to help the patient.  Dr. Richard Owen and Dr. Rahim Samji have been influential mentors to Alanna, allowing her to spend time with them in their IR clinic and encouraging her to pursue a career as an IR.

Prior to becoming the chair of the CAIR RFS, Alanna was active on the board of the CAR RFS and has a passion for leadership. Any medical student or resident who thinks they might be interested in IR is encouraged to join the CAIR RFS. The RFS organizes educational and networking events throughout the year and is focused on growing the network of medical trainees interested in IR through collaboration with other international organizations like SIR and CIRSE.

When asked if she has any advice for medical students or junior residents, Dr. Supersad encourages them to get involved, be passionate, and work hard but don’t lose sight of what is important outside of medicine.  In her spare time Alanna is active with soccer, basketball and travel and is hoping to explore Portugal next. When not working hard or seeing the world she spends time with her friends and family, who are mostly based in Alberta, as well as her partner, Ben, and her Woodle, Gatsby. If you don’t know what a Woodle is, google it and fall in love. You’re welcome 🙂

The CAIR RFS Section is excited to be starting their third year in action with trainee members from each of the residency programs across the nation! We are looking forward to repeating the successful events that were put on last year and we are also excited to plan some new events and work on new initiatives in the coming year. Stay tuned for upcoming RFS events.

If you would like to get involved please don’t hesitate to reach out to Alanna Supersad, the Chair of the CAIR RFS at rfschair@cairweb.ca
< Back to CAIR News