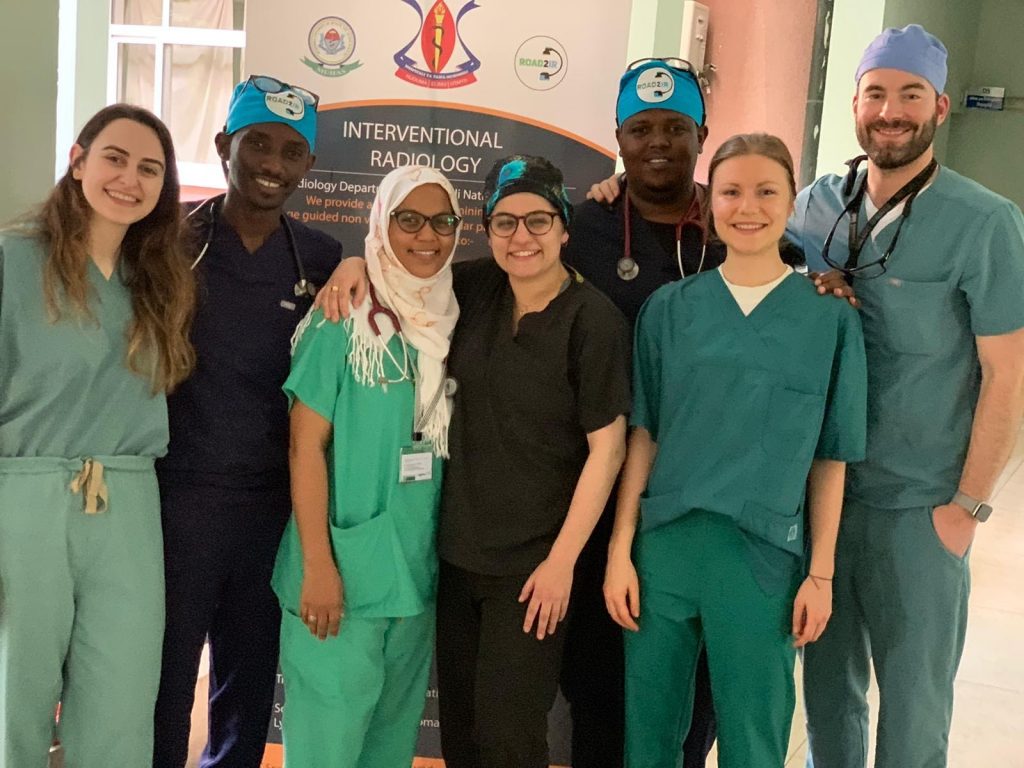 With a growing demand for minimally invasive procedures and a large underserved population worldwide, global outreach in IR is growing at a rapid pace. Tanzania is at the center of these advances with road2IR, the first IR training program in Subsaharan Africa.  In Tanzania, a country of over 60 million people, there is only 1 diagnostic radiologist per 1 million people and no prior IR service.

Established in 2018 under the leadership of Yale University’s Dr. Frank Minja, neuroradiologist, and Dr. Fabian Laage Gaupp, IR fellow then resident, road2IR has created an IR master of science (MSc) degree at the Muhimbili National Hospital (MNH) in Dar es Salaam.  The curriculum is based on hands-on case-by-case learning as well as online teaching and journal clubs. The first three IR fellows in the program are Dr. Ivan Rukundo, Dr. Azza A. Naif, and Dr. Erick M. Mbuguje. They have previously completed their diagnostic radiology residency at the same institution.  Three radiology residents have already been selected to start their IR training in the next academic year.

Road2IR has attracted the participation of many IR departments including Emory, Yale, and Michigan. From Canada, there has been participation from health professionals from McGill University and Lakeridge Health in Oshawa. All visiting IR teams are welcomed at MNH as part of two-week rotations. Teams are composed of an interventional radiologist, IR nurse, IR technologist, and may include fellows, residents, and medical students.  Flights for IR nurses and technologists are paid for in full by the organization. The aim of road2IR is not only to train the physicians but to train an entire team, as the techs and nurses are also new to IR in Tanzania.

A unique lR learning environment and new cultural experiences were driving factors in my decision to join the February 2020 University of Michigan team as a second-year radiology resident. Having discovered the program a year earlier online, I was initially hesitant to embark on my first international radiology project, especially with an IR team from another institution whom I did not know. However, I am so glad to have taken this leap of faith, as my participation in the new IR program in Tanzania has been one of the most rewarding experiences.

What happens when you sign up as a volunteer? Pre-departure preparations and logistics are organized by the road2IR team, making the experience simple and seamless. You receive an email containing information to facilitate your trip and have a series of calls to go over details and answer questions. Once in Dar Es Salaam, you are greeted at the airport and taken to your team’s apartment, a 20 min walk from the hospital. For the two-week period, your team has a dedicated driver.  You typically work from 8 am to 4 pm Monday to Friday.  A teaching session given by the visiting attending, first thing in the morning, is always welcome. Residents and fellows work up and present referred patients to the visiting attending to plan appropriateness, type, and timing of intervention.  On weekends, visiting teams are encouraged to explore the beaches of Zanzibar or go on a safari adventure in the Serengeti National Park.

The highlight of my experience was working with and learning from the motivated local team of IR fellows, residents, nurses, and techs.  I have reached out to the current IR fellows to get their perspective on their road2IR initiative.

Dr. Rukundo, how did you get introduced to IR, and what made you develop a passion for this specialty?

My introduction to image-guided interventions was during my exchange clinical rotation in Interventional Cardiology at a hospital in Germany. The procedures were life-saving, less invasive, and looked fancy like nothing I had ever seen back home. When I finished medical school, I had already decided on doing radiology and not cardiology but still wanted to pursue the dream of doing the fancy, image-guided and life-saving procedures. My passion grew because of my love for the ever-evolving imaging technology, the chance to interact with patients and the innovation in IR.

Dr. Naif,  what benefits have you seen with offering IR services in Tanzania?

The benefits have been immense. We have heard so many positive feedback from the referring services and patients themselves. We have been able to somehow extend life expectancy to some of our patients, for example, those with advanced cervical cancer who were not able to undergo chemotherapy due to renal failure. Without percutaneous nephrostomies, their cancer treatment was not an option for them.

Dr. Mbuguje, what were the logistics and difficulties involved in introducing road2IR in your institution?

I would comment that there were no difficulties, rather opportunities. The IR service in Tanzania is a new field of medicine. We were required to introduce the field even to our fellow doctors and community in general through clinical meetings and going on live television for public awareness. Our institutes welcomed it with great passion and gave us the support we wanted. Current challenges are the availability of  IR attendings, nurses, and technologists, and the issue of equipment which is still a problem in Tanzania and Africa in general.

Dr. Naif, what has been the highlight of your IR experience thus far?

To see those patients that would have died but otherwise got saved by IR procedures. To be able to learn from the incoming teams has also been the best experience. Everyone comes in so enthusiastic to teach which has been really great.

Dr. Rukundo, what do you think could be done to improve the process and outreach of road2IR even more?

I would say increasing the time that visiting teams spend in Tanzania from two week blocks to let’s say one month or more depending on availability. This would help trainees to steadily develop under the available attending and would give more time for attendings to train targeted skills and better monitor the progress of trainees. Another idea is increasing global visibility via a road2IR website where all information can be accessed.

Dr. Mbuguje, how could Canadian IR teams contribute to road2IR?

The most important is to develop mutual agreements on how we can arrange human resources in capacity building. For example, sending IR attendings, nurses and technologists, getting the chance to attend professional meetings and workshops conducted by Canadian IR societies as well as benefit from professional mentorships.

In the short two years since its creation, road2IR has flourished into a multi-university collaborative effort and has become the new model for IR global outreach missions. The future is bright for this program which has been recently awarded the Derek Harwood-Nash International Education Scholar Grant by the RSNA Research and Educational Board of Trustees. There are now plans of expansion to create the first IR program in Rwanda, as Dr. Rukundo intends to bring his training back to his home country. Road2IR is also working with the Society of African Interventional Radiology and Endovascular Therapy (SAFIRE) towards advancing vascular and interventional radiology throughout the African continent.