A Tribute to Dr. Kenneth Sniderman 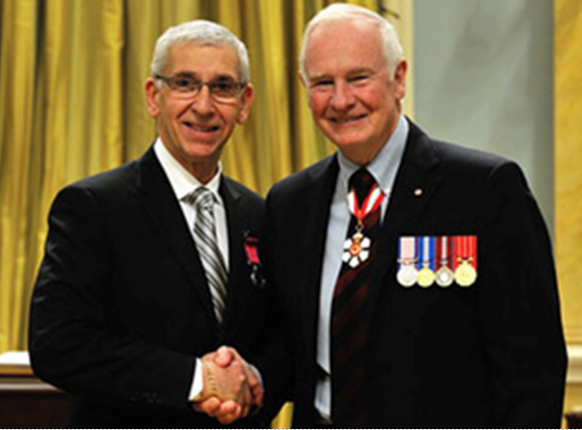 Dr. Kenneth Sniderman being awarded the Medal of Bravery after saving a drowning stranger trapped beneath a boat.

The VIR community recently lost one of its pioneers and mentors, Dr. Kenneth Sniderman, who passed away in April 2021 following a battle with cancer. Below are two statements from Dr. Simons, who worked alongside Dr. Sniderman and Dr. Bernstein, a VIR fellow that trained under Dr. Sinderman.

Dr. Ken Sniderman was a pioneer in Angiography and Interventional Radiology in Canada, and the rest of the world as well.

He returned to Toronto and the Toronto General Hospital in 1985, and began his long and distinguished career at TGH, the Toronto Hospital and the University Health Network, (all the same place, just different names).  He published many papers here as well, particularly a landmark paper on iliac angioplasty.

In his 35 years in Toronto, he trained innumerable fellows and residents, many with high profile positions all over the world.

He was ahead of his time in many ways.  He became very sub specialized, at a time when this was unusual.  Most radiologists in that era did multiple modalities and organ systems.

He was also ahead of his time in practicing patient centred care.  He was not afraid to embrace the clinical aspects of Interventional Radiology, long before it became the norm, and he set an example to all of us, on how we should treat and respect our patients

His angiographic technique was superb.  Every angiogram Ken did was a work of art.  He was meticulous in his technique.  Many fellows remember the attention to detail that Ken brought to every case.

Ken was a tireless worker, and loved teaching fellows. and residents.  He loved his career, and his passion for his work was contagious.  He was never afraid to learn new techniques as he came along, and adapted to all the changes that have occurred in Medicine since he began his career.

He learned ultrasound and nonvascular interventional radiology, many years after starting practice, and excelled at this as well.

For those of us in IR, the passing of Ken Sniderman, is like the end of an era.  Hopefully, his passion, enthusiasm and wisdom, will carry on through the many trainees he has nurtured over his career.

He is missed by his colleagues at UHN/MSH, and by his family and friends.  Our condolences go out to Ken’s wife Francie and his three sons, Michael, Joseph and Robert.

Ken was a fabulous teacher and colleague.  Countless interventional radiologists across Canada, and indeed the world, were fortunate enough to learn from his vast expertise, techniques, attention to detail and patient-centred approach. His enthusiasm for IR was always apparent, even when called for emergency cases during the dead of night! Ken will be missed but always remembered with fondness and great respect.