Techs Take on PICC Insertion in the Prairies

When I first returned to Saskatoon after my IR fellowship, radiologists (primarily IRs though we now have some general radiologists doing them too) placed all PICCs. This was just the way it had always been.  Recently a technologist lead initiative for PICC placement at St. Paul’s Hospital in Saskatoon has resulted in a shift towards primarily tech inserted PICCs.  I wondered if there were perhaps some other sites across Canada thinking of transitioning to this model, so in the spirit of collaboration I decided to interview the techs involved. – Dr. Nicollette Sinclair

DISCLAIMER: Cole and Jacquie have been encouraged to use humour as much as possible given the excellent sense of humour of our reader(s).  When possible they will make fun of the interventional radiologists they work with, mostly implying that we are always busy doing non-work related things. This may or may not be true.

NS:  Give the reader(s) a brief introduction about who you are and what you do.

CF: My name is Cole Frandsen and I have been working as an IR Technologist at St. Paul’s Hospital in Saskatoon since 2011 upon completion of the Sask Polytech program. I am currently working on completing my Bachelor of Health Sciences degree through Thompson Rivers University. When not at the hospital I enjoy being out and travelling as much as possible; cycling, golf, skiing and being out with friends typically occupy the rest of my time.

JT: My name is Jacquie Turley, I’ve been working at SPH since completing the Sask Polytech program in 2012, working as a general tech while completing my undergrad at the University of Saskatchewan until 2015. Shortly after, I obtained a job in Interventional Radiology and have been there since 2016. I spent the majority of the pandemic completing the Masters in Healthcare Leadership program through Royal Roads University and plan to use these powers for good moving forward in the Saskatchewan Health Authority (SHA). Outside of work I enjoy time traveling, attending concerts, spending time with my pets, camping, cycling, and I have been recreationally lawn bowling for 7 years.

NS:  What was the driving force behind the shift from radiologist placed PICCs towards tech inserted PICCs?

CF: After attending the CAIR conference in Montreal in 2014 where I learned about technologist/nursing placed PICC lines I was motivated to pursue the process of implementing this into our practice in Saskatoon.  During our time at SPH we have seen the evolution of practice for the Interventional Radiologists, so we became more motivated to evolve our own practice as technologists as well.

Since implementation, we have had significant improvements in workflow and have consistently improved patient PICC access, not only resulting in secure IV access for inpatient treatments but also improving flow through the hospital and expediting discharge. We no longer have to wait for a  Radiologist to be available to perform these procedures, as they are typically busy doing one of the many more involved procedures that they are inundated with.

JT: I went to the CAIR conference in 2018 and did the ultrasound guided access workshop which was an excellent resource and demystified ultrasound for me. We were sick of waiting around for the radiologists who were either scrubbed in to other cases or “busy” in their offices but were actually making personal calls and online shopping/researching cricket tickets/acquiring commercial real estate. Between dictations they seemed to be getting really into Bitcoin (whatever that is).

NS: Bitcoin is a decentralized currency! Why is that so hard to understand???  Ok, Walk me through the steps of setting this program up.

CF: Myself and one of the IRs started out by contacting our provincial technologist regulatory body (SAMRT) to see if this would be something that could even be incorporated into our scope.

I was given a large amount of assistance from our Angiodynamics© rep Angela Tyler, who had previous experience assisting in the set up of similar programs. I discovered that technologist driven programs are much less common than nursing based programs. Angiodynamics© was able to provide us with our formal PICC line education modules, as well as the creation of a site specific training module with a thorough overview of the entire PICC insertion procedure that was created alongside our three interventional radiologists.

After many, many meetings with the various tiers of leadership, revisions and delays from a provincial health region amalgamation, we were successful in implementation approximately 3 years from initial start time. Dedication and motivation to succeed were our driving factors in keeping this dream on track, despite the desire to quit more than once.

JT: As far as I could tell, Cole attended 1000 meetings, responded to 32000 emails, thought about quitting 3-5 times and was road blocked by the legal department only thrice. Through sheer force of will he pushed it through all the bureaucracy and snatched victory from the jaws of defeat.

NS: What was the biggest challenge to overcome?

CF: To be honest the whole process went quite smoothly, other than the time commitment and dedication of creating all of the documentation. The SAMRT and SHA management were supportive along our journey, provided we followed the appropriate process to keep everything legit. We had an immense amount of support from our interventional radiologists, who supported us every step of the way. They attended many meetings with myself and helped create and proctor our training until we were up and running.

JT: I can see other facilities having potential issues with support from their IR’s but luckily ours do whatever we tell them to do and supported this all the way through. Quite seriously though, the doctors have to be the ones fueling this from the start as it requires a lot of trust between them and the technologists. Plus the health authority listens to doctors for some reason, so that helps.

NS: What would you do differently?

CF: While I was persistent, I think a bit of a more assertive push would have gotten things off the ground a bit faster.

JT: I would have gotten in on the ground floor so I could claim more credit for the success of this project.

NS:  What do you think is next?

JT: I think this lays really good ground work with the SAMRT and the health authority to develop an advanced technologist program in our practice. This role would take on some of the simpler/low-risk IR procedures and administration/patient follow-up roles to free up the IRs for more real estate and cricket ticket acquisitions. With IR developing so quickly and taking on new procedures all the time, the technologists seeking job satisfaction are keen to expand their practice and help get patients timely care and maintain rapid access to procedures.

CF: I WILL be getting in on the ground floor of developing advanced practice in Saskatchewan and claiming my share of the credit for this project.

Thanks to both Cole and Jacquie for taking the time to answer my questions, if there are any techs out there reading this who want to get more info, feel free to email Cole at cole.frandsen@saskhealthauthority.ca. Now they both need to get back to work, there are PICCs to do! 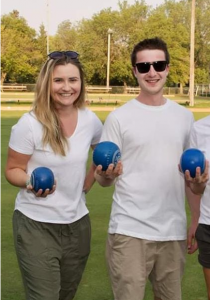